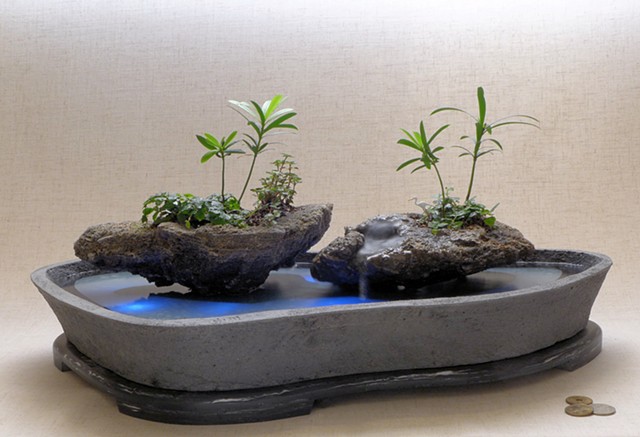 Aldabra is a raised coral atoll on the western side of the Seychelles in the Indian Ocean. About 125,000 years ago, the collapse of a melting glacial ice sheet in the Antarctic caused sea levels to rise 20 to 30 feet above the current level. Today, the fossilized coral reef of Aldabra stands 26 feet above the water, ancient testimony to the effects of rising polar temperatures. Basically untouched by humans, it has been nearly unchanged for thousands of years.

The islands of the Aldabra Group are designated a World Heritage Site by UNESCO and are home to over 400 species of plants and animals, including the largest population of giant tortoises in the world.

In this composition, a string of waterproof LED’s illuminates the water from below through a translucent Corian panel beneath the islands. A Corian base supports the cast concrete tray.