Seneca Rocks is a favorite destination of rock climbers on the East Coast of the United States. Rising up to 900 feet above the Potomac River in West Virginia, the fin-like formation was created when the ocean bottom rose up and folded some 440 million years ago.

In this composition, a lone climber approaches the peak of one of the rocks, harvested from layers of a large feather rock boulder. The waterfall and low-lying mist are produced by a miniature pump and ultrasonic fogger hidden inside the base.

The tray was fabricated of unfinished cedar and repurposed Corian countertop remnants. The markings at the right corner of the tray are the Chinese characters for “shan” (mountains) and “chuan” (streams). 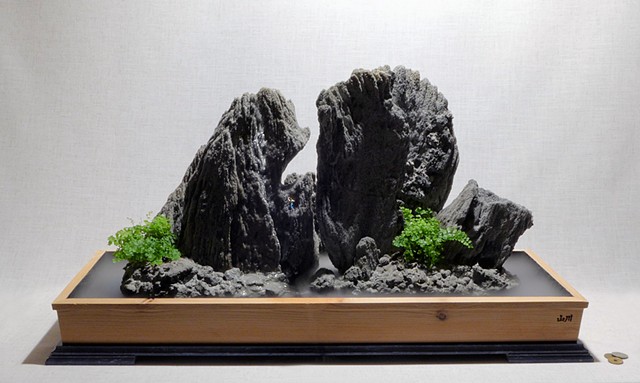