Caves wind endlessly through the karst limestone mountains of southern China’s Guangxi Province. Many prized scholar’s rocks are formed of the same perforated stone, creating what artist Richard Rosenblum called “worlds within worlds” which draw the viewer deep inside.*

This interpretation of Rosenblum’s concept was formed of a single large feather rock. Waterfalls cascade and converge within the many intersecting caves, creating unique natural music and nurturing the dwarf ivy climbing up from a hollow near the base.

The single stone is set on a simple black Corian pedestal inside a mica pot finished in bronze patina. *Rosenblum, R. (2001). Art of the Natural World. Boston: MFA Publications 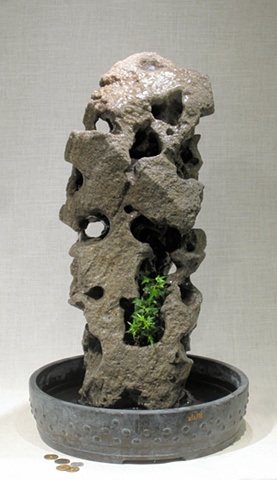