This composition pays tribute to Asian scroll painting, an art form dating back thousands of years. In these paintings, mountains, streams, and waterfalls are common themes.*

In this composition, water and mist cascade from the mouth of a cave near the top of the mountain island to a pool bordered by two companion islands. Low fog drifts across the surface of the water and over the edges of the tray. On the nearest island rests a miniature figure beneath a Ming fern growing on the island.

The Korean tray, a casting of 85% mica and graphite, was finished with a clear lacquer. Below the lip of the tray are the Chinese characters “shan" and "chuan" (mountains and streams). *Richard Barnhart, James Cahill, Nie Chongzheng, Wu Hung, Lang Shaojun, and Yang Yin. (1997). Three Thousand Years of Chinese Painting. New Haven, CT: Yale University Press. 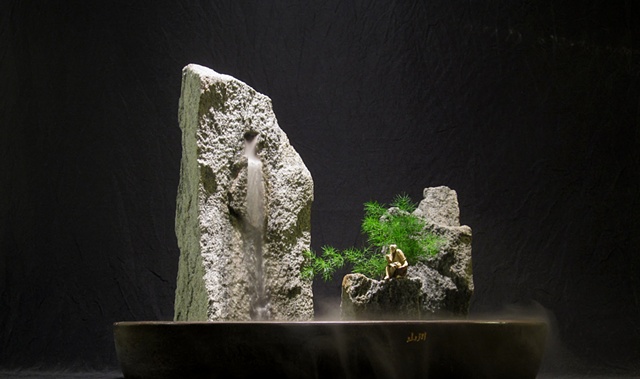